A MEMORY HAS BEEN EMBEDDED deep in my mind for almost two decades.

It’s the kind of compartment immortalised in sitcoms and sketches usually involving archetypes of comically contrasting backgrounds reading wildly contrasting newspapers. The kind of compartment where passengers sit facing each other in long lines, and which has a door one side that allows you into a connecting corridor and a door on the other side through which you enter and leave the train.

This memory, I would tell myself, must hail from at least the late 1980s. At a push, it could be the very early 1990s. But no later. Such compartments must have passed out of use by the time British Rail was being prepared for privatisation. Such an antiquated (by which I mean old, not redundant) structure could not have been trundling along busy routes or creaking along branch lines while John Major’s government was busy bowdlerising BR in the name of competition.

To solve the mystery, I turned to my diary.

Fully expecting the incident to date from autumn 1994, I was amazed to find it took place on Monday 27 November 1995.

My diary records that I was stuck at Runcorn from around 4.30 to 6pm, in a compartment empty of people save for one businessman who grew increasingly frustrated at the delay, but whose anger manifested itself merely in “sighing, walking around and throwing his briefcase on to the opposite seat and off again.”

It also notes that no official explanation was offered for the incident. Indeed, it seems there was no communication with or from any train staff at all. There was simply word going around that the train had broken down, which was, in any case, completely self-evident.

After 90 minutes of stationary tension of the kind more common to an afternoon play on Radio 4 or an episode of the old Children’s ITV strand Dramarama, everyone was ordered off the defunct train so it could be towed away. We then had to wait for a delayed InterCity to pick us up and take us on to Liverpool.

Someone reading this might be able to tell me what sort of train it would have been that broke down so spectacularly.

Perhaps it was actually quite common for those types of carriages with compartments to still be in use well into the era of New Labour, Britpop, Chris Evans on Radio 1 and The Sunday Show on BBC2. Yet in my head I’d reassigned them to a slightly earlier, older age. Perhaps the way I compartmentalise my own life can be as misleading as the neat division of the decades. Perhaps the 1980s only really ended in 1997. 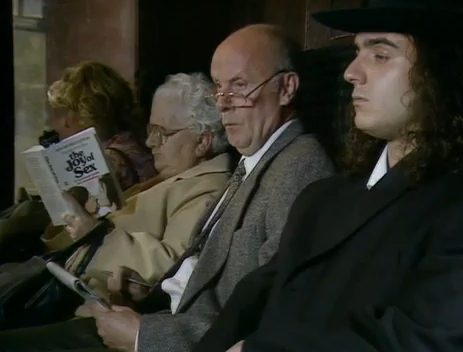