That was how early it was. So early that Radio 4 had yet to come on the air. It was the earliest I had got up on a Saturday in my entire life. And the coldest I had been at that time of the morning on any day ever.

Why such an eye-blearing, ritual-scrambling departure? I had a rendezvous to make, one that involved catching a train that took twice as long as Another More Well-Known Operating Company Chiefly Associated With Beards to reach its destination, but one that also required – with irony as deep as the snow that lay all around me – a rail replacement bus service from my home in Finchley to another part of the Northern line, which in turn could get me to Euston.

It was best not to dwell too much on all these things, and instead just get on with it.

Besides, I was about to experience another first: travelling on a train during sunrise.

Surrounding me on the 07.46 from Euston were people going somewhere for a reason – unlike me, who was merely going somewhere. There was a woman dressed in the uniform of a prescription chemist. There was a group of teenagers on their way to a football match. Someone else was wearing a suit. A family – “It’s only our second time ever on a train” – were off to a bit of a do.

All of them had enough on their minds to rarely throw a glance out of the window. But this was their loss, for the views were spectacular. The early morning sunshine, filtered through chilly mist and freezing fog, made the snowy landscapes sparkle with promise. The Home Counties were completely flattered, and indeed flattened, by the frosty confection that had laid polite yet joyful siege to the country this past week.

I was heading for Stafford but at a speed slow enough for me to spot a road sign to Althorp, final resting place of the subject of Madonna’s next film*, and on a similarly funereal note the graveyard near Nuneaton station, for many years earlier in my life a memorable waymarker on the route from Liverpool to my hometown of Loughborough.

One of life’s self-evident truths is that a long train journey is a great thing. But a long train journey through snow is even more thrilling. I found the two hours up to Stafford passed by effortlessly. Not once did I feel the need to distract myself by listening to some music or opening the book I’d brought with me.

Well, almost. When the snow suddenly vanished just outside Rugby, I’d only the anticipation of what lay ahead to keep me from other pursuits. And what a pleasantly eccentric prospect this was.

I was meeting up with my friends Robert and Scott, with whom I’d explored the old Croxley branch line last autumn. Robert was spending the day collecting a few more “ghost” stations for his blog, and had invited us to join him – an offer that perfectly suited London Midland’s ‘Great Escape’ deal, allowing unlimited travel anywhere on their network all day for £15.

Abandoned stations: what is it that makes them more than the sum of their parts? The three that we visited – Norton Bridge, Barlaston and Wedgwood – were in various states of deterioration, but their respective clutter and degrees of abandonment all pointed to a controlled running into the ground. They hadn’t simply been left for dead. Theirs was, and here is a clue to their appeal, a managed decline.

There’s something about managed decline that is strangely alluring. It’s what Britain does well, of course. Heavens, it’s what we have been doing well for the best part of 100 years. And anything that is in a state of managed decline exudes a sort of melancholy charm.

It’s especially palpable when applied to buildings. There’s no pretence to them. They don’t try to hide their destitution. They are slipping gracelessly but openly and plainly into oblivion. And they want us all to see.

Norton Bridge was the most far gone. All that survived was a stump of a platform in the middle of two sets of tracks. The waiting room was boarded up, there was no station entrance to speak of, and the passenger footbridge had been almost entirely demolished. No trains have called here since 2004.

It’s fair to say that of equal, if not greater, concern to us was why there was ever a station here to begin with. Norton Bridge is barely a village. Wikipedia stoically reports that:

“In addition to the park there is a phone box operated by British Telecom, which is scheduled to close soon and no longer accepts coins, and a postbox.” 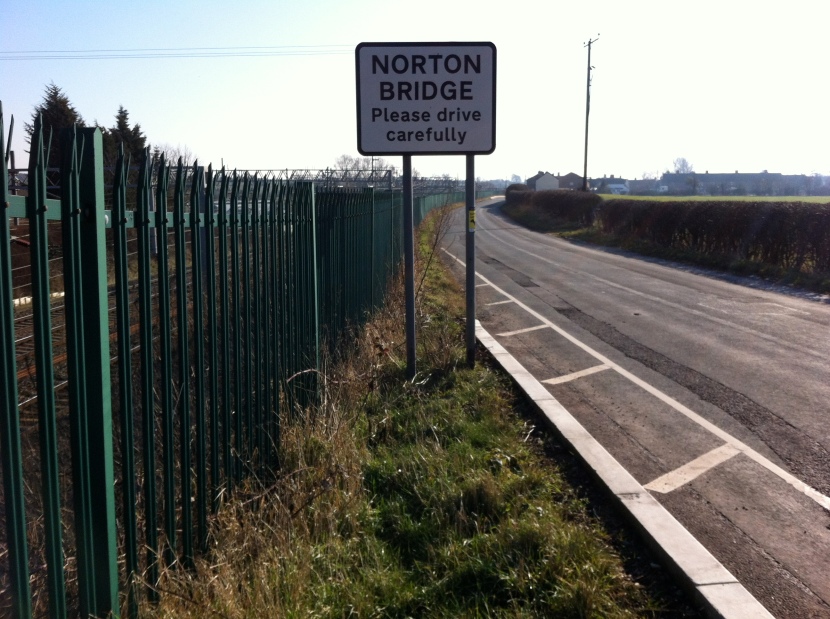 For what logical reason did trains ever call here? To which the answer is: none, for they must only have stopped here illogically, and the Wicker Man-esque feel of the place just compounded our feelings of bewilderment. That, and having to wait an hour for a bus out of the place. If only I’d thought ahead and brought sandwiches.

Barlaston felt like it had more right to call itself a village, boasting as it did a few traces of advanced civilisation, like shops.

Its station, though disused, is also of much greater substance, straddling as it does a level crossing across which we meandered back and forth, snapping away. 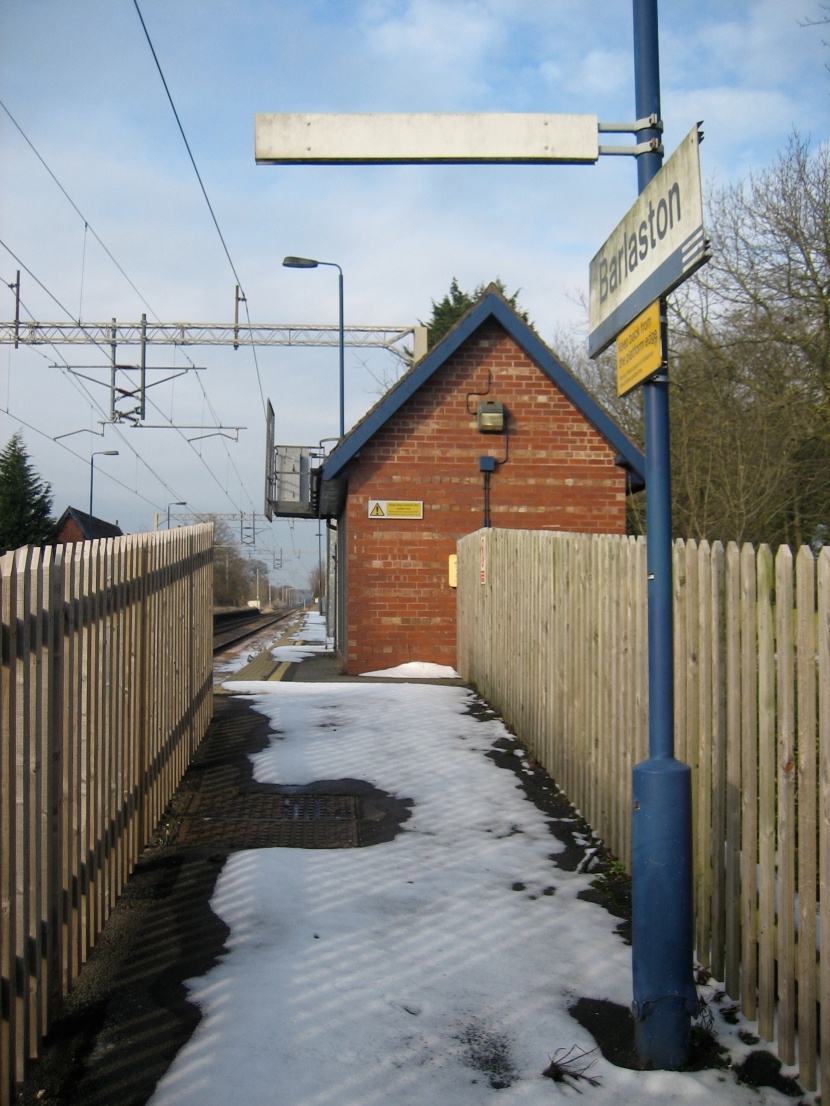 A “ghost” station in the snow represents a hugely evocative combination, even if the snow is only there because the temperature hasn’t risen above freezing all day and you’re starting to lose complete sensory awareness in your toes.

But any reference to the Manpower Services Commission is always going to get my camera-finger twitching:

And yes, that’s happened before.

The third in Robert’s hat-trick was Wedgwood, a short stroll away from Barlaston along the Trent and Mersey Canal, and a rather long trudge when all you’ve got beneath your feet are alternating patches of ice and dog shit.

But here again the climate and the context somehow fed off each other to create a slightly entrancing if eerie location.

Within the space of 10 minutes or so, several trains rushed through, bringing down the level crossing. The station once existed to bring workers to the adjoining Wedgwood complex, which today loomed up silently through the frosted forest. Like its neighbour down the line, it was closed in 2003 and never reopened. And like its neighbour, superficial sights and sounds suggest it is still a going concern. But no trains stop here, and they never will again.

Is it worth being bothered by any of this? Nobody really misses these three stations – do they? There’s probably more interest in them now they are in retirement than when they were fully operational. And bizarrely they seem to have more of a personality now than I bet they did when they were merely three more stops on the line between Stafford and Stoke.

Yet I think there was a bittersweet reaction among all of us upon seeing these stations that even our most cynical of retorts (and there were many, particularly about the daft and creepy Norton Bridge) could not dispel.

For one thing, if they weren’t there, we’d have to find other places at which to stock up on melancholy charm. And there wasn’t really any to be found at those stations that were still open through which we passed along the way. Stafford is a dump, Stoke is too anonymous and Stone is architecturally magnificent but loses points for its station building having become an amenities centre**.

But there’s another reason why it’s worth being bothered. That’s because it’s fun. It might not sound it from some of the paragraphs above (particularly the one about having to get up early), but most of that is just bluster. Granted, you need the right company, which I most certainly had. You need the right conditions, which turned out to be unexpectedly grand. And you need the right frame of mind, which materialised, as it usually does, the moment my first train of the day started on its journey.

But with all of those in place, even the necessity of yet another rail replacement bus through some of the narrowest lanes of the most narrow-minded backwaters of Staffordshire didn’t seem that bad.

*Not true. The subject of Madonna’s next film, indeed the subject of every Madonna film, is of course Madonna.