EARLIER THIS YEAR, I turned over my calendar to be greeted with a message: 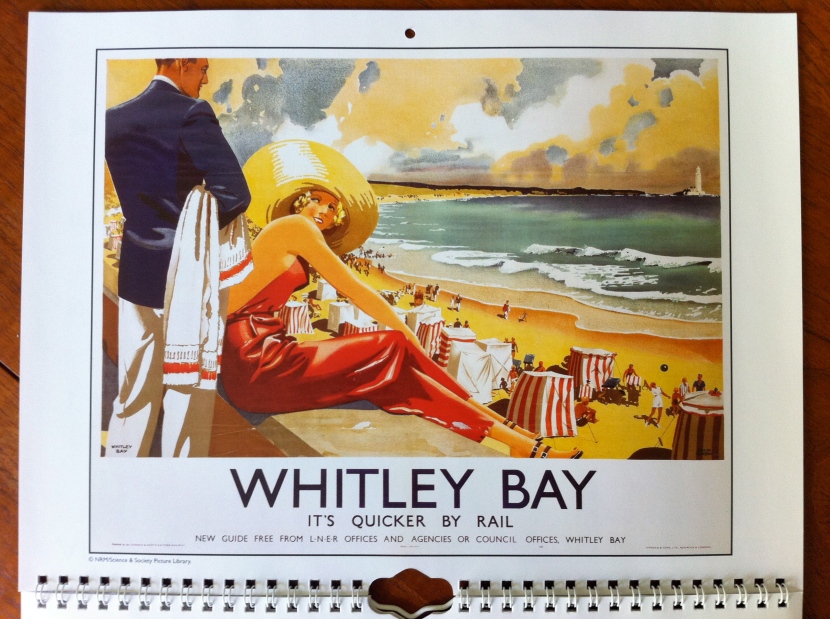 And earlier this month, I decided to see if it was true.

The Whitley Bay I found on an overcast but muggy September lunchtime didn’t quite correspond with the one hanging on my kitchen wall. Sure, it was unquestionably majestic. Yet frankly, it looked like it had been forcibly evacuated of its entire population of stripy beach huts, dapper gents and broad-boatered women.

But a quicker way to reach this North Sea resort and one-time haunt of the Radio One Roadshow than by rail I doubt you’d be able to find. And that is wholly due to the local connection with Newcastle, one that has existed for 101 years, and which since 1980 has formed part of the Tyne and Wear Metro:

Yes, the Metro: a lovely light-rail municipal merry-go-round, bolted together in the late 70s from bits of lines dating back as far as, blimey, 1834. I’d never been on it before, despite, 25 years ago this very month, being so taken by the notion of its existence that I’d tried to draw my very own map of its circuitous routes. Here’s the official version:

My own attempt, perhaps luckily, no longer exists. But it was high time to rectify a quarter-century oversight and see the Metro for myself.

Whitley Bay station is worth a visit alone. It was built in 1910, is Grade II listed and is really quite charming:

There’s a mosaic in the entrance hall that caught my eye, not so much because of its design but thanks to the plaque describing how the installation was sponsored in part by the “Tyne and Wear Passenger Transport Executive and carried out through the Youth Opportunities Programme of the Manpower Services Commission”. Those phrases seem just as much of a relic nowadays as the infrastructure upon which they are inscribed.

My feelings of being somewhat out of time were compounded by the sight that greeted me outside the station:

I can’t be the only one who occasionally likes to refer to the Post Office as the GPO. (Or rather, wishes it still was.)

I strolled down to the esplanade where, among the dozens of boarded-up hotels and nightclubs, occasional signs of life, human or otherwise, were evident:

The school holidays were not yet over, but an environment I’d assumed would have been an obvious haven for juvenile adventures and family excursions was completely empty of people.

I was the only person the walk along the coastline, and the only person to survey the vast expanse of water and sky curling round into the mouth of the Tyne. Not that I’m complaining, you understand. 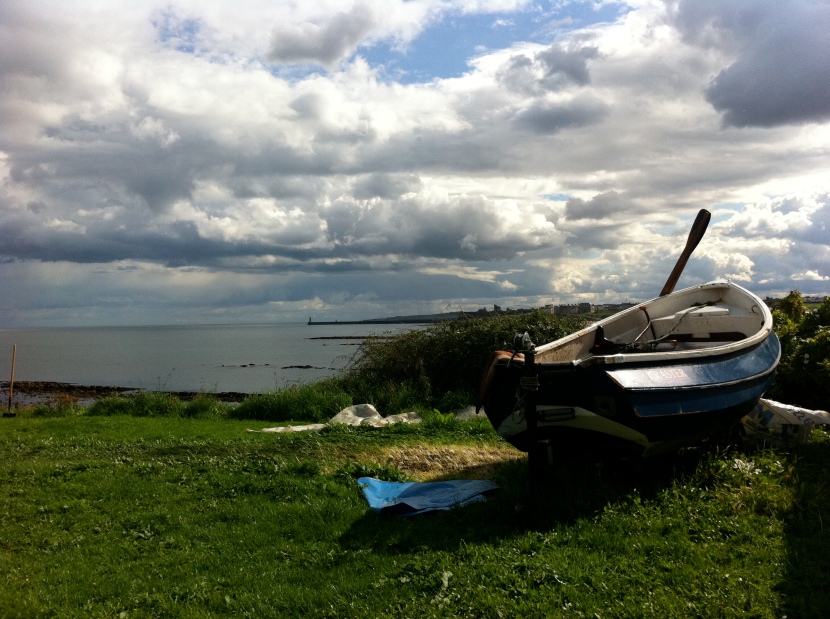 I carried on round to Cullercoats, where I rejoined the Metro for the short journey to North Shields. I then meandered and mooched my way down to the riverside, where my Day Rover ticket entitled me to free passage on the Shields Ferry. 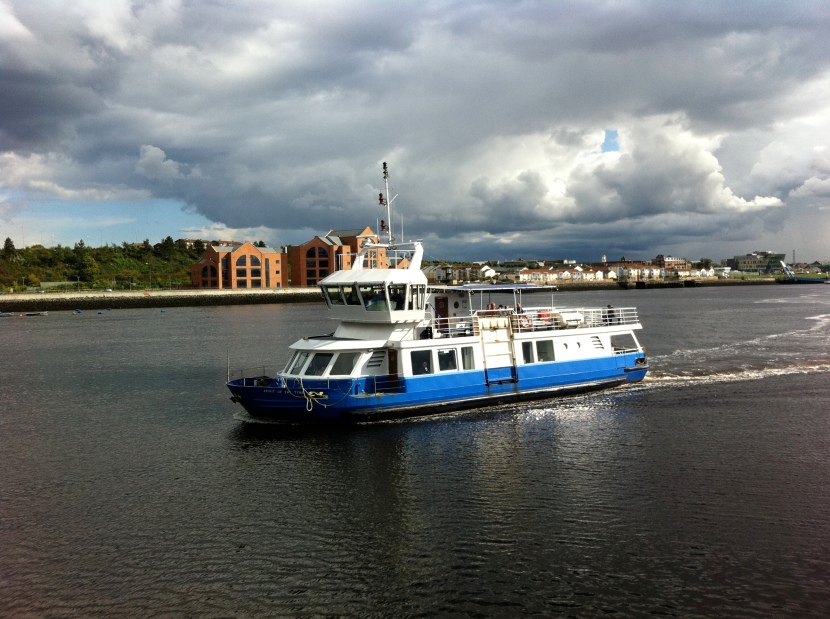 Combining land and water as part of a continuous journey always makes me feel a bit Palin-esque. That’s Palin M, not Palin S; I had no sudden desire to kill a moose or ban abortions.

The ferry deposited me in South Shields, where I made my way to the corresponding Metro station, replete with platforms niftily set above the main high street. I was very taken with this arrangement, being sure to capture the views both below: 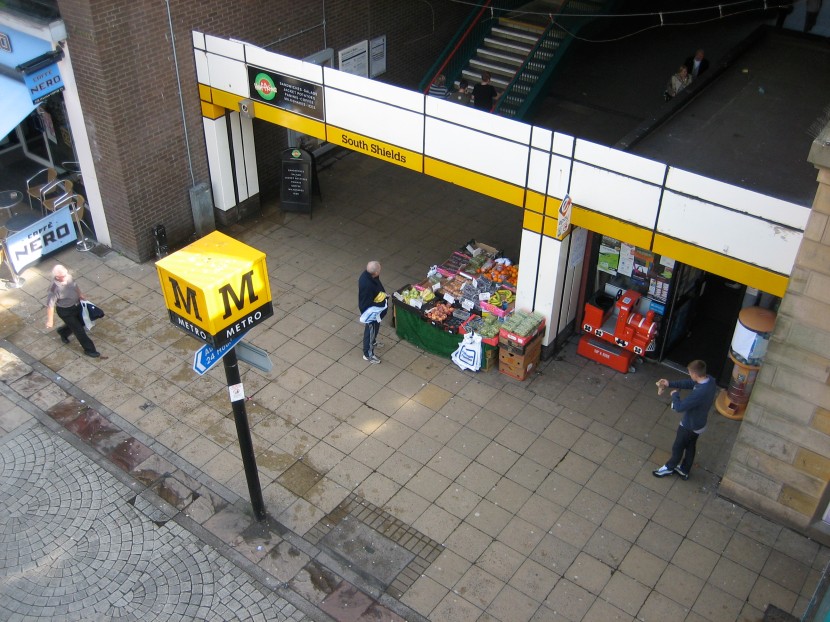 High time for a photo of an actual train, I think:

Making the most of my ticket I headed back towards Newcastle then changed at the challengingly-titled Pelaw on to the “green” line for a quick trip to Sunderland. The important word there being quick. I was in the town about an hour and already felt like I’d overstayed my welcome. Still, I got to see my second estuary of the day: 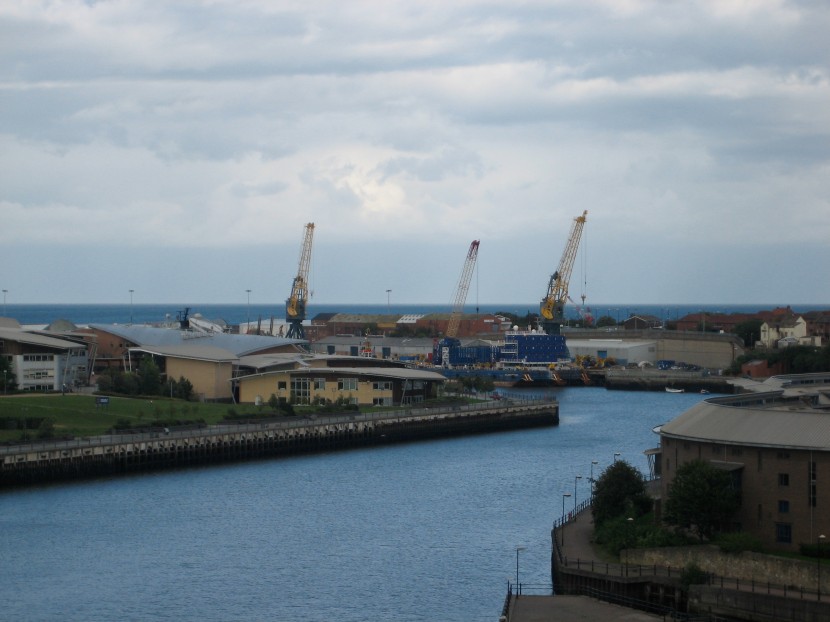 And (dons geek hat) experience the novelty of being in a station with platforms served by both mainline and light rail services. I could have caught a train back to London from here.

Instead I continued on to the end of the line: the deceptively rural South Hylton. And yes, I did deliberately sit at the very front of the train so I could see this:

Then I returned to Newcastle, experiencing as I did a peculiar sensation of moving, flashing lights while travelling along the Queen Elizabeth II bridge over the Tyne. I later discovered this was an installation called Nocturne by Nayan Kulkarni, unveiled in 2007. At the time it was Britain’s biggest piece of public art: an unexpected treat as I readied to disembark and head back to Newcastle Central station for the train home.

The Metro is brilliantly unequivocal in purpose and design. It’s a fabulous service: regular, reliable, comprehensive. But I didn’t get the feeling of pride in its existence that is so self-evident when using the London Underground or the Glasgow Subway.

It’s always been relevant. It’s always been pioneering; it was one of the first networks to ban smoking, the first fully light rail system in the country, and the first underground network to enable people to use mobile phones in tunnels. Yet it doesn’t feel especially loved. I know this is based purely on my first, fleeting impressions. But even during the few hours I was riding it, I sensed its passengers were using its trains out of reluctance rather than enthusiasm.

Admittedly they are the very same trains as when the Metro was inaugurated in 1980. A complete refurbishment is on the way, however, along with a makeover for all the stations.

But inevitably, as is the case these days, this upgrade came at a price: part-privatisation, with the operation and maintenance of the network now contracted out. The end result could be a triumph, if all involved parties a) talk to each other b) work with not around each other and c) put the greater good of the service first. But it could also be an unholy mess, culminating in a Metronet/Tube Lines-esque costly debacle.

For the time being, regulars can enjoy a taste of the 21st century in the shape of Haymarket: the one station to have been dolled up so far, reopened in 2010 by Princess Anne, and rather swish if slightly soulless:

I have to say I don’t like the way Newcastle airport is referred to simply as “Airport”, both on signage and by the automated announcements. Conversely, “this train is for… The Coast!” is a nice touch, albeit eternally denying the likes of Whitley Bay even one precious, much-deserved namecheck.

One final thing: ticketing. During my trip I revealed myself to be hopelessly unprepared for the business of having to purchase a ticket WITHOUT USING NOTES OR CARDS.

Yes, you can only buy tickets for the Metro using coins. At machines. And most definitely not in person at kiosks or travel centres.

“You’ll have to use THE MACHINES,” the man behind the perspex screen politely but firmly told me. But the Day Rover cost £6.80 and I only had a 10 pound note. “I suppose I can give you some change,” the man sighed. In doing so he committed the first cardinal sin of retail: making the customer feel awkward for having done business with you.

I duly trotted off to feed £6.80 worth of coinage into a machine with giant multi-coloured buttons the like of which I’d last seen on Chock-A-Block.

At least that had Fred Harris telling me what to do.