THERE WAS A SMELL OF affluence and hokum. I felt like I’d wandered into an episode of Lovejoy.

It was a few weeks ago, and I was in Norfolk, on my way to one of the country’s least-used railway stations. I’d stopped along the way in the small village of Reedham, where I thought I’d enjoy a pleasant stroll along the river.

But there was something about the place that left me unsettled. Perhaps I should have read the signs. Literally.

I soon discovered this was a village that did its own thing and kept its own company. For my arrival was greeted with averted eyes and narrowed lips. A stranger?! Here, in Reedham?!

I can think of less hospitable receptions, but the beauty of the surroundings made the situation all the more discomfiting. Had I stumbled upon some sort of monied conspiracy, gently fermenting here among the private barges packed with bottles of chilled wine and back issues of the Daily Mail (yes, I saw them, on every boat)?

I turned on my heel and beat a retreat. It wasn’t a hasty one; I didn’t want it to look like I was panicked. Not for the first time in my life, I felt myself asking: what would Ian McShane do?

I was evaluated a second time when I was back on the train and nearing my destination: the station of Berney Arms.

When I double-checked with the guard that we would actually be stopping there, he reassured me we were, but also advised me to make sure I was at the front of the train, as this would be the only part that would fit into the platform.

I was sitting right at the back.

As Berney Arms swam into view – from being a tiny speck on the horizon to only a slightly larger speck in the near-distance – I began my walk of shame. I could sense dozens of pairs of eyes regarding me and concluding: “Ah-ha: one of the freaks”.

And they were right.

For I was getting off at a station that looks like this: 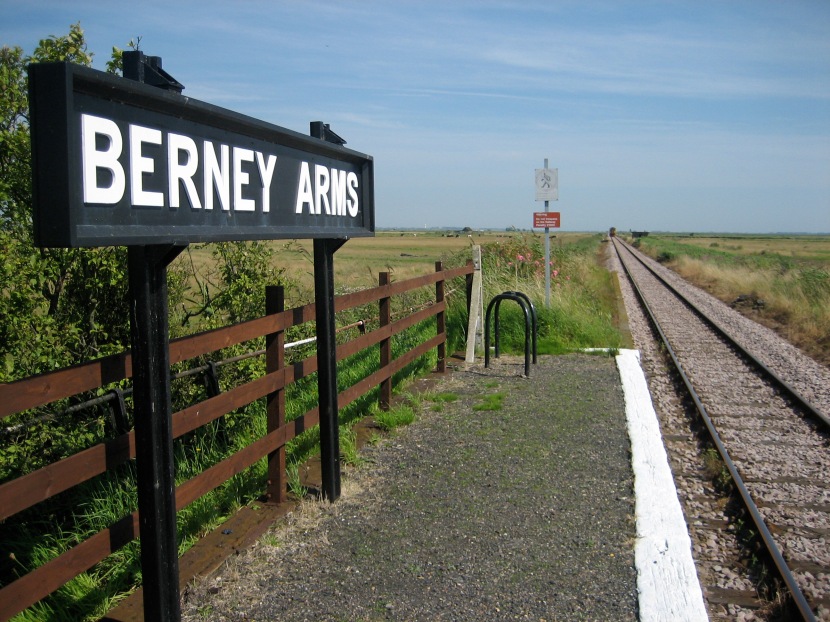 And I was the only one getting off.

The guard gave me a “there, there” sort of glance as he checked to see I really did want to stay on this stump of a mound of a outpost of a nothing-else-for-miles-around location, before signalling for the train to continue on its way.

Suddenly I was completely alone. 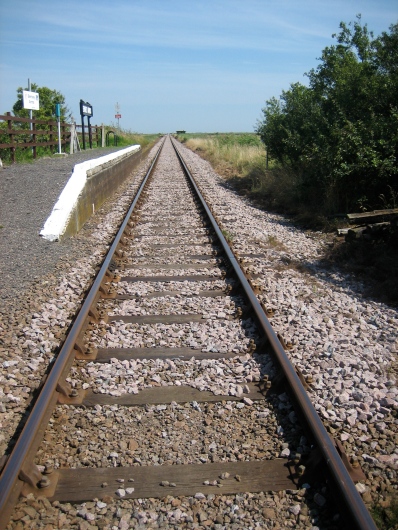 One of the first things that crossed my mind was this would NOT be a good place to commit the perfect murder. The isolation of Berney Arms would not be a boon to the master criminal, more a curse. How to engineer a quick getaway, for instance? Where to dispose of a body? How to avoid all those pairs of eyes on the outward journey? And above all, how to publicise your treachery to the rest of the world, when the rest of the world has spent the best part of two centuries happily ignoring pretty much the entire region?

If, however, you’d like to disappear completely for a few hours, and do so on your own terms, Berney Arms is for you.

I stood between the tracks of the single, solitary railway line for some time, trying to take in the full spread and sounds of the landscape.

I ought to admit I was also revelling in the novelty of just being in such an unusual setting. It was probably just as well nobody saw me doing this. I was reminded of Philip Larkin’s line about the priest and the doctor in their long coats, running over the fields.

As if you couldn’t guess, Berney Arms is not a place you can reach directly by car. You can sail up the River Yare, park your boat by the nearby windmill, then walk to the halt. But that’s it as far as an interchange goes. 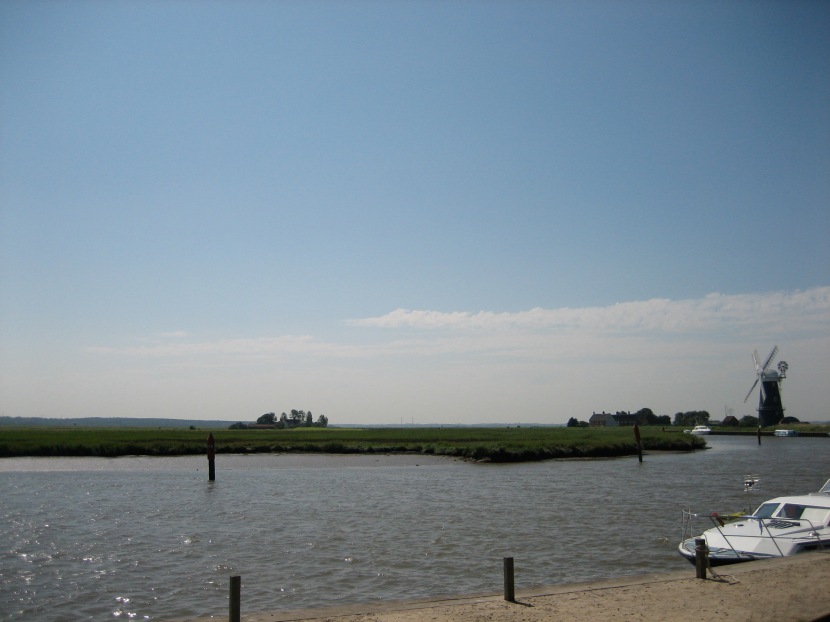 By any sort of modern-day standards, the station is an enormous anachronism and should not exist. That it has endured is in part an accident, based on a misunderstanding to do with an assumption concerning an agreement over the terms on which a local bigwig sold the land to the Yarmouth and Norwich Railway in the 1840s.

The muddle became the momentum that has kept Berney Arms open all this time, despite various attempts by numerous organisations to insist otherwise.

Out of confusion and occasional confrontation has emerged something as idiosyncratic as it is appealing. The child inside you takes over at places like these. For a time I sat on the edge of the platform, swinging my legs, just because I could.
Part of me wanted to linger longer, but another more rational, grown-up part of me knew I would only really appreciate Berney Arms once I’d left.

I set off across the fields to the river and the long, low footpath to Great Yarmouth.

Several minutes later, a train appeared from the opposite direction, heading back up the line to Reedham and Norwich. 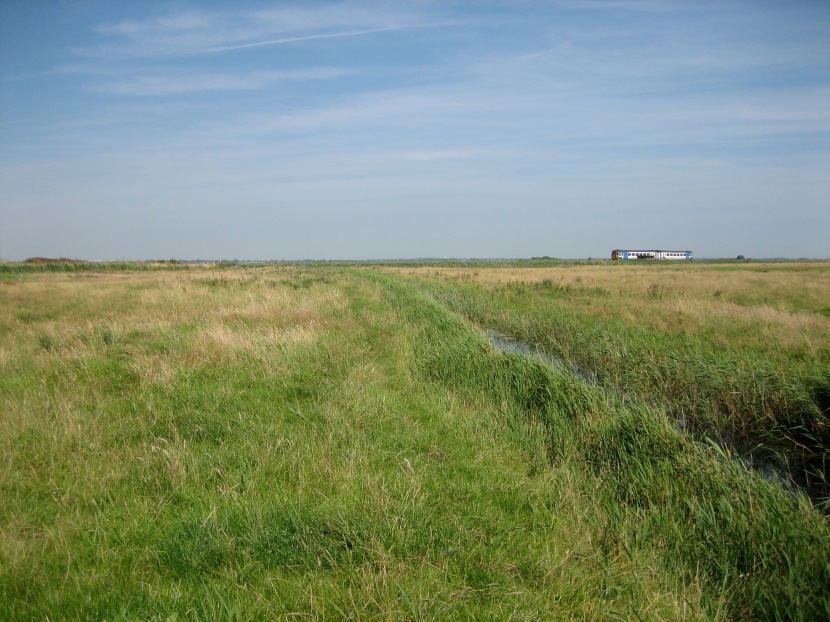 Nobody got off. It didn’t even stop.

I was rather glad. 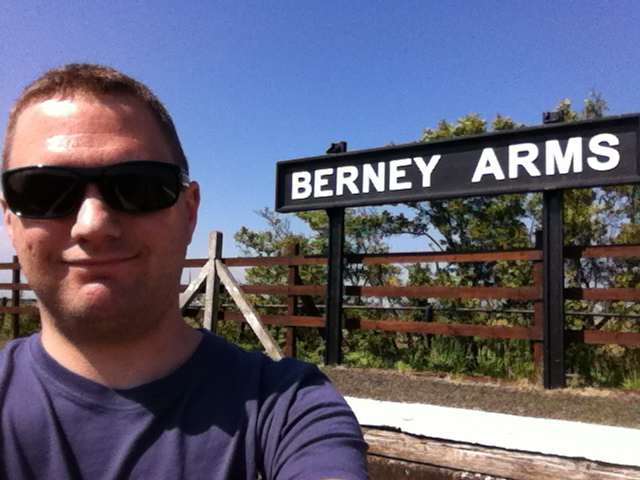